ENTRANCE TO A LANE:

The project links the production of new paintings with those from The Otter Gallery Collection as a context and foundation for the conference/symposium on British landscape painting.

The development of  modernist inspired approaches to landscape painting brought new impetus to an  well established tradition. This tradition, reaching back from Turner and Constable to Gainsborough and beyond, was challenged by a wave of new and distinctive British artists. The relationship or perhaps the clash between 19th Century Romantic tradition and a later European visual aesthetic centred on perception, expression and formalism (which also included something as elusive as the idea of  ‘significant form’ of Clive Bell)  produced a new visual vocabulary/ language. Through it artists were able to engage critically with the nature of painting itself and the role of  representation. Most notably perhaps is the development of abstraction as a distillation of the sensual and of sense perception combined  with ideas  of memory, of the sense of place and the position of the natural world seen against the backdrop of industrial mechanisation, war and technological advance. Nash, Hitchens, Lanyon, Heron, Sutherland, Gear and Moore (all present in The Otter Collection) produced work developed from a  synthesis of European and American painting notably abstraction and established a distinct set of  approaches to landscape painting. They were, inevitably, to ‘past the baton’ on to contemporary artists of whom there are many including, Hockney, Andrews, Oulton, Crowley, Burrows, to name a few and not forgetting Martin Greenland  the winner of the 2006 John Moores Painting Prize with his intensely detailed and somewhat traditional, pastoral landscape painting ‘Before Vermeer’s Clouds’ seemingly quite at odds with and yet thoroughly enmeshed in the cut and thrust of the conceptual ground of contemporary painting

The question arises what are the new critical  approaches to painting landscape in the 21st century. Landscape painting is everywhere yet most of it is the mannered and decorative rhetoric of painting as commodified  ‘interior design’ rather than as a critical re-invigoration of any tradition. Can the genre ‘Landscape’ escape the set of immutable conventions that it seems to carry with it?

The conference/symposium will use these questions as  points of departure to explore the position of landscape painting in 21st century and whether there is a particular British sensibility to the work being produced.

Sutherlands ‘Entrance to a Lane’, one of the most significant paintings in the Otter Trust Collection, gives its  title to the exhibition bringing visual ‘marker’ as well as a challenge to the project.  How to adapt paintings’ language into the new century and how to engage in a dialogue with the British Modernist painters?

Of course, the modernist trajectory into and around abstraction has been modified, shifted and perhaps overrun not just by the relations to contemporary art and the art of the past but also to photography, film and everything ‘Post’ modern throughout the latter part of the 20th Century. The ‘visual landscape’ has shifted; the possibilities of responding to it have been thoroughly problematized. Abstraction has lost its purity (did it ever have such?) and the language of painting now operates across and between the ‘fields’ and ‘edges’ of complex signifying processes and historical practices. The challenge is to use the British Modernists from The Otter Gallery Collection as a point of departure………

More personally; my own work, presented within the context of the exhibition and symposium, represents a new departure for me with a move into the ‘territory’ of landscape derived paintings. The work stems from a move to a new house and the fascination with how the overgrown and neglected garden became a site for visual exploration. For me the garden was not only a particular place of visual forms and properties with specific landscape motifs but also a place as became a metaphor of /for the self. Other works in this new series emerged out of the long travels to and from the university through which the experience of ‘landscape’ took on the Baudrillardian notion of ‘screen’ and network and disappearance [of the real] whereby the experience of landscape is rendered as the speeding image across the windscreen ‘the landscape unfolding like a television screen. . . ‘(see ‘Ecstacy of Communication’ pg 127 in Foster H (1993) Postmodern Culture London Pluto) 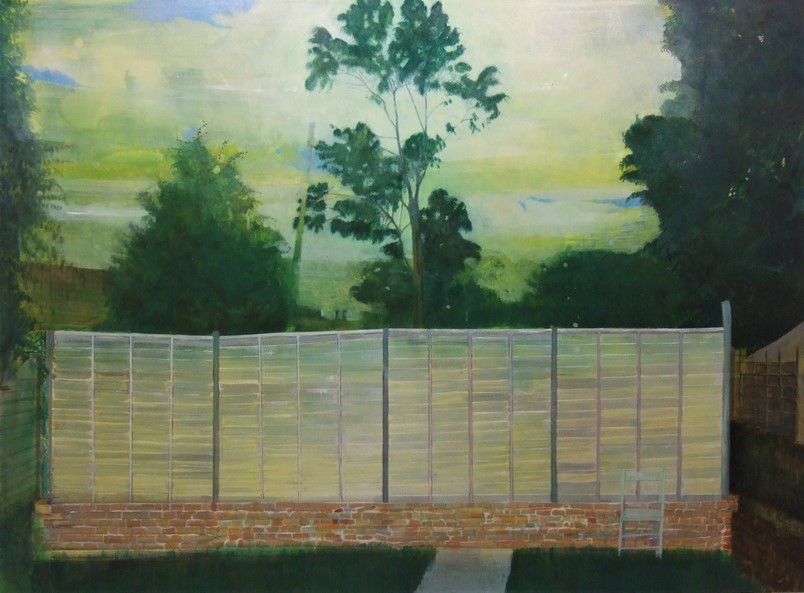 The tree beyond the fence is not native to these shores. The garden is a little bit of fenced off and insular personal landscape. A private territory. In the painting the fence forms a visual barrier, a formal edge that defines a space and frames it. A gridded boundary. An exaltation to ‘Keep out’ but also to ‘keep in’…. like a small imprisoning…….exiled from ……….

The flatness of the fence with its modular stripes and blocks are a deliberate visual signifier, a reminder of a host of modernist works that utilized the grid which, according to Rosalind Krauss is the quintessential modernist form. The vertical and horizontal (and/or deviations from it) are aspects of a great deal of 20thcentury art from Piet Mondrian, Frank Stella, Donald Judd, Anges Martin  to Sean Scully. To use a grid is to knowingly co-opt the language of modernism

Always as it were, the ‘self’, fenced off, fenced in by history. 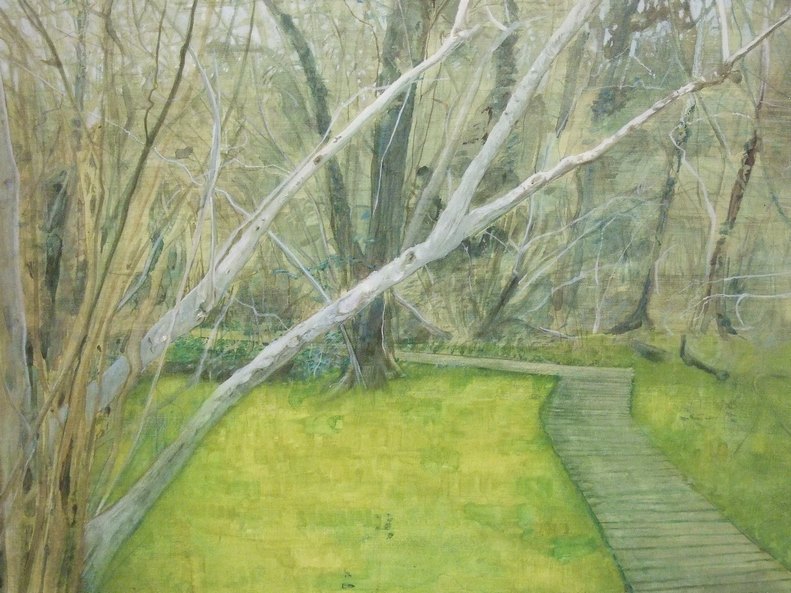 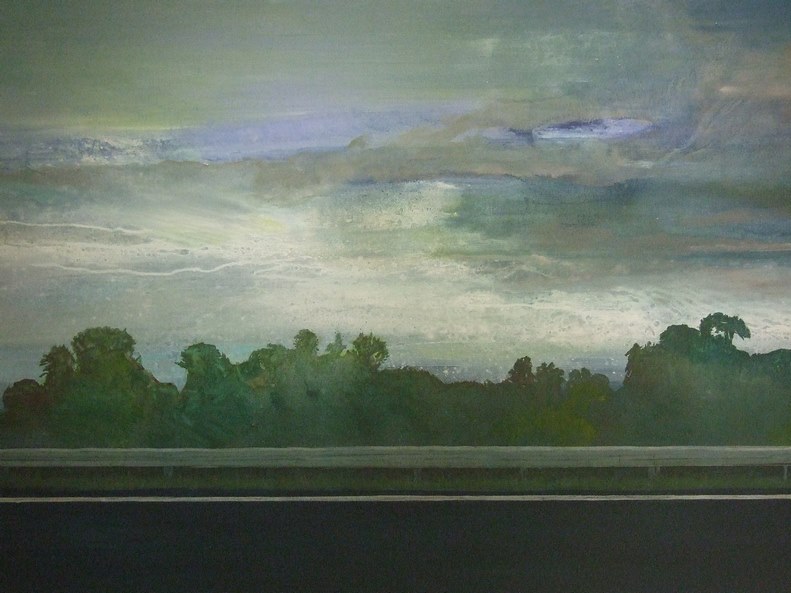 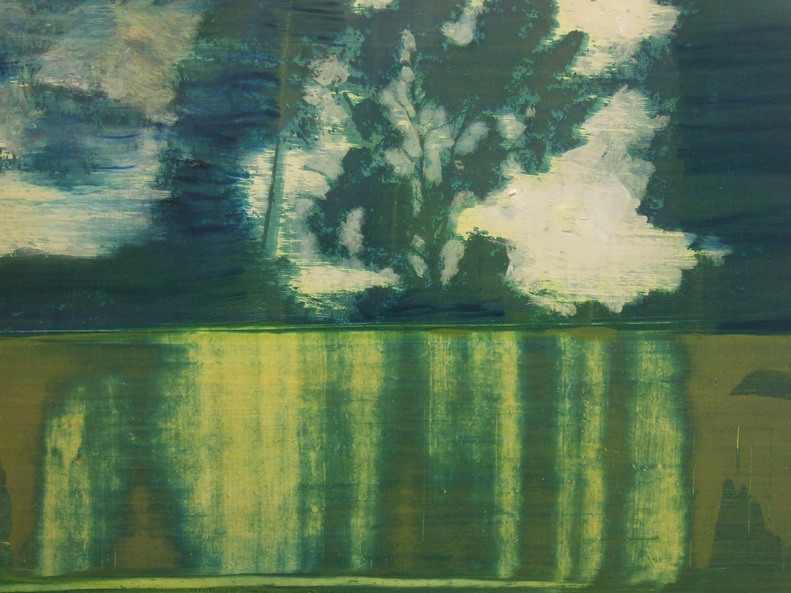 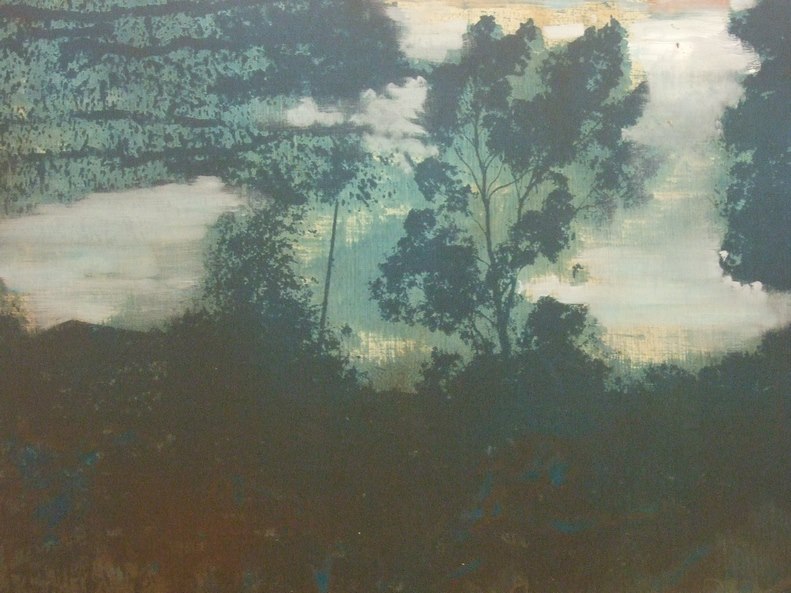 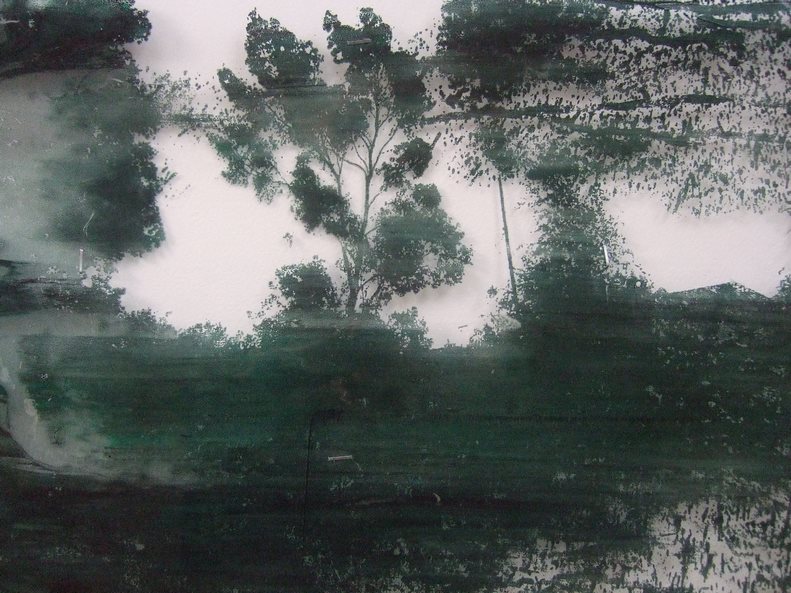 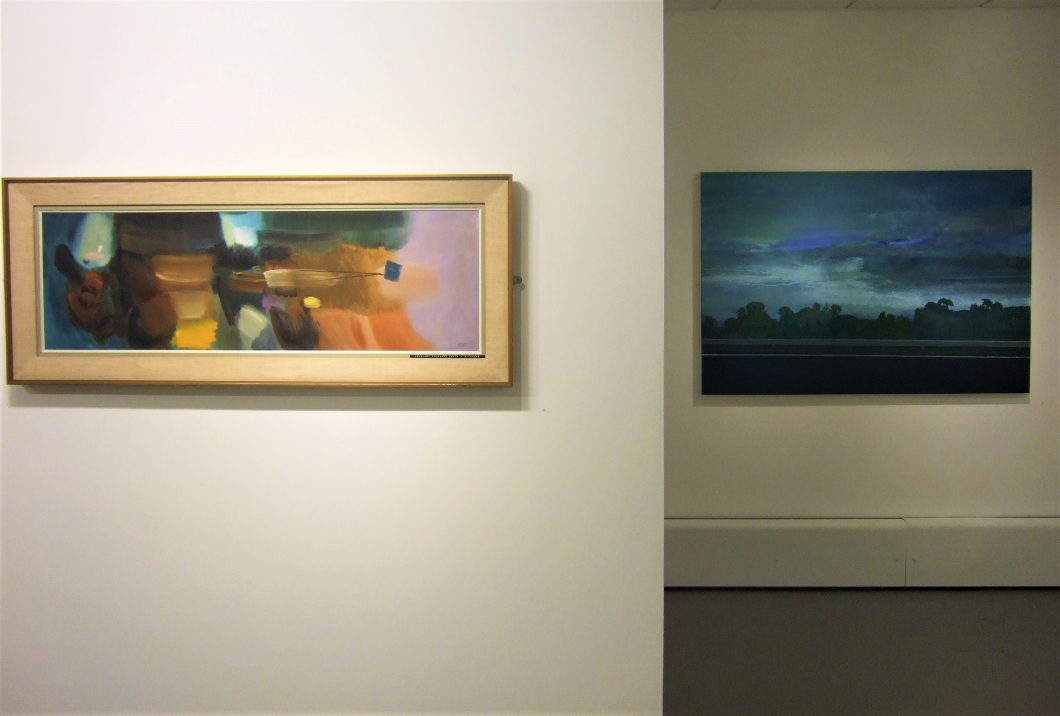 These paintings continue the theme of landscapes edges, barriers and borders. The use of screen printing heightens the relationship between photography and landscape ‘views’. The idea of a experiencing the landscape from a car, as a screened view was very much a conscious move to incorporate Baudrillard’s notion of screened reality (from his essay ‘the ecstasy of communication’ ) 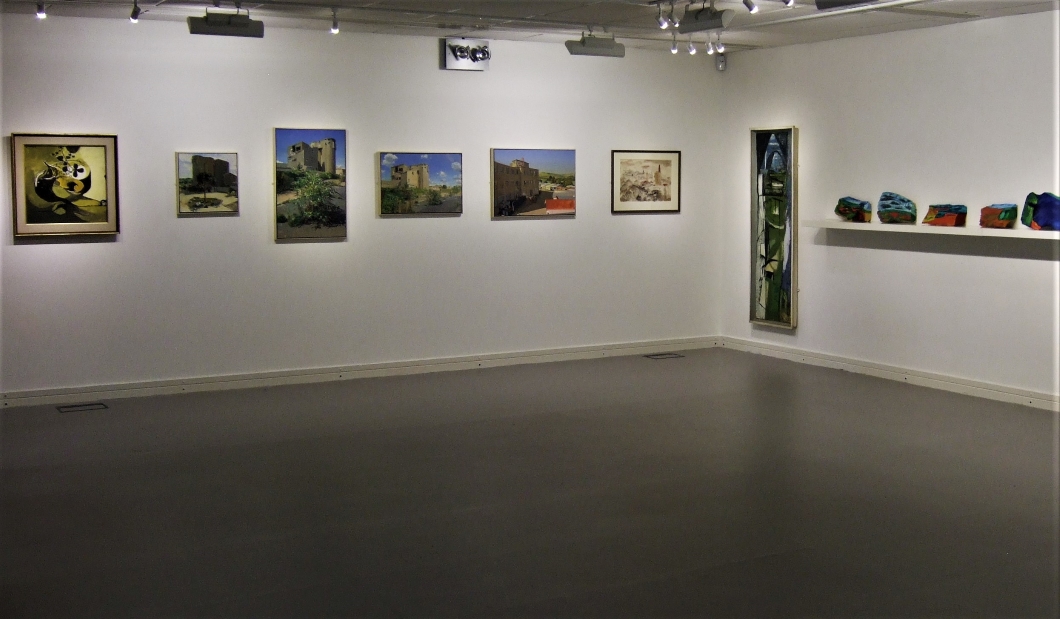 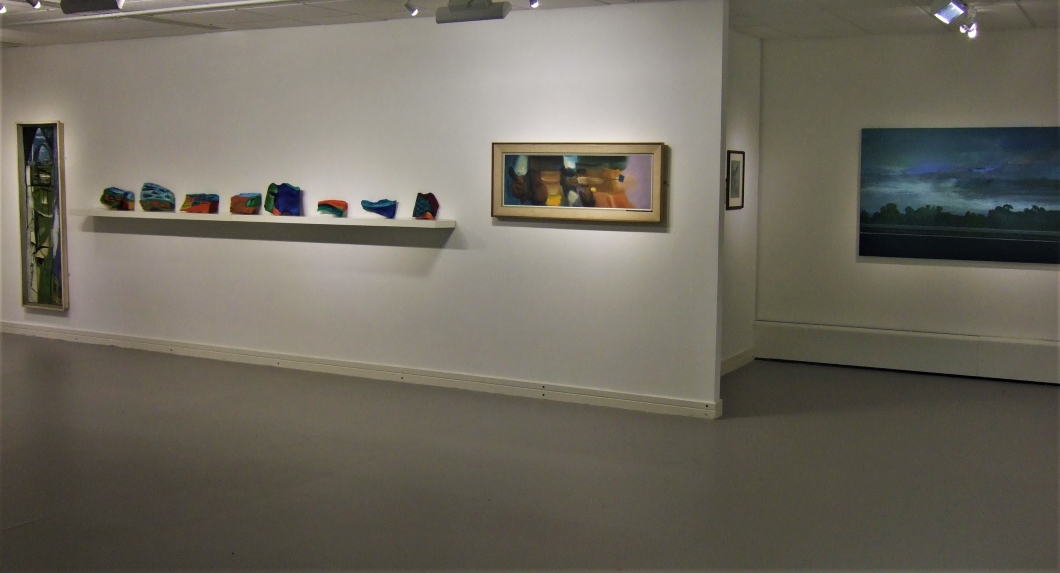